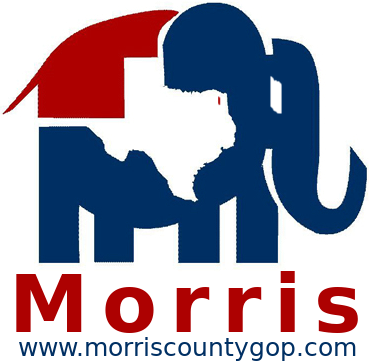 Thank you for visiting the Republican Party of Morris County’s website. It’s an exciting time here in Texas and across the USA. The battle to secure our blessings is more fierce than ever and we need real patriots to stand up and defend freedom. Texas itself is at risk to fall into the hands of liberal socialists. Join together with us in this crucial battle. So, explore our site to learn more about us and what you can do to help preserve the values and liberties that Texans have so proudly cherished.

“… Freedom is never more than one generation away from extinction. We didn't pass it on to our children in the bloodstream. The only way they can inherit the freedom we have known is if we fight for it, protect it, defend it and then hand it to them with the well thought lessons of how they in their lifetime must do the same. And if you and I don't do this, then you and I may well spend our sunset years telling our children and our children's children what it once was like in America when men were free.”

"Texas will again lift its head  and stand among the nations. It ought to do so, for no country upon the  globe can compare with it in natural advantages."

Republicans are bringing-it in a BIG way here in Texas!
Are you ready to be a part of making history? Join with us today.
#WeAreTheStorm #DumpTheDemocrats #Freedom #Liberty #USA

Your party has been part of the community for many years, working tirelessly to make it a better place.

United By A Common Goal

We know the value of being connected. That's why we're here. Help us help you to build a better and more free Texas and Morris County.

Our candidates can't win this race without your help. There are many ways you can help us achieve our goals.

You Can make A Difference

Freedom -- fight for it, protect it, defend it

Check out this great video, it's pertinent in keeping Texas Red.

Sanctuary Cities for the Unborn

Sanctuary Cities for the Unborn are now here in Morris County. The citiy of Naples has passed an ordinance banning abortion and protecting the lives of babies. Spearheaded by Mark Dickson of Right To Life of East Texas and supported by the Republican Party of Morris County we saw something groundbreaking take place Monday evening. Naples was the Second/Third city in the United States to declare that murdering innocent babies is no longer tolerated.

The Republican Party of Morris County continues to prove it will defend EVERYONE'S Right to Life, Liberty, and The Pursuit of Happiness. Join us to help make sure that Freedom and Liberty are secured for all Texans and their future generations.

The City of Naples, Texas (Population 1,378) became the SECOND/ THIRD CITY in the nation to pass an ordinance outlawing abortion and declaring themselves to be a Sanctuary City for the Unborn! Everyone voted in favor of the ordinance with the exception of one. Thank you to the brave Naples City Council members who stood strong in defense of life.

To see see your city become a Sanctuary City For the UnBorn sign the petition here: